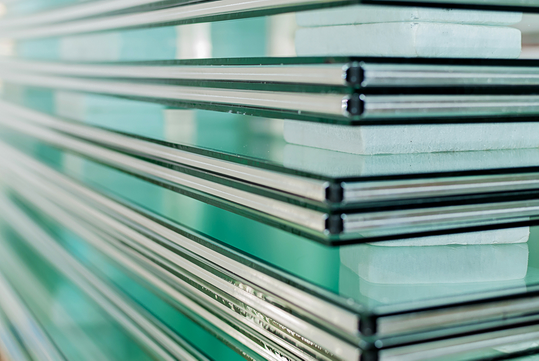 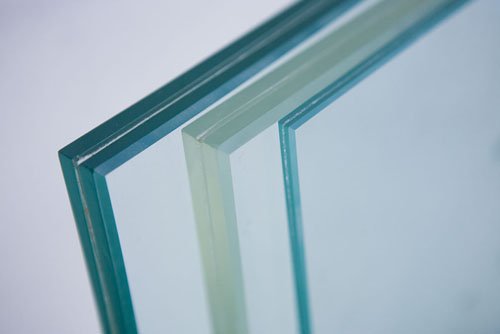 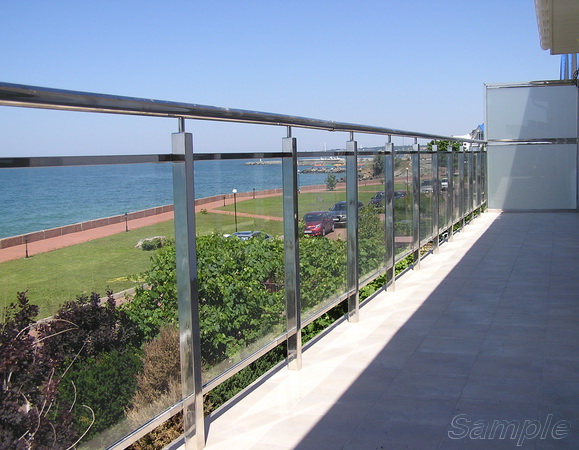 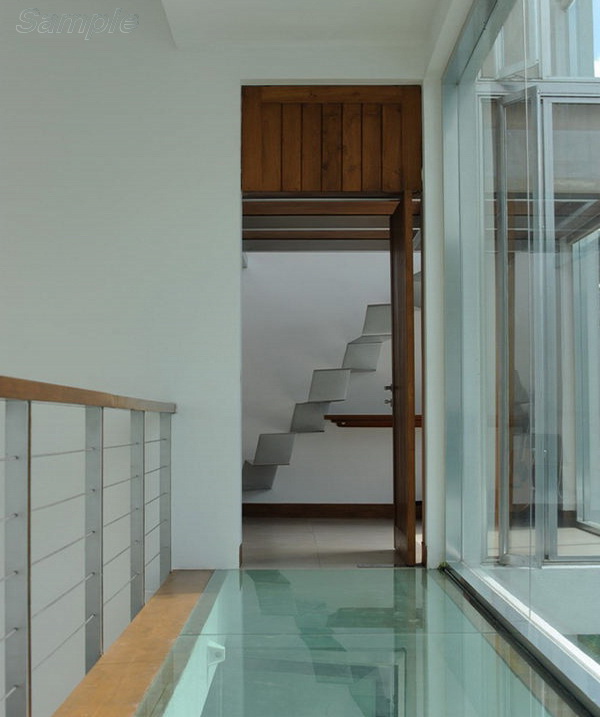 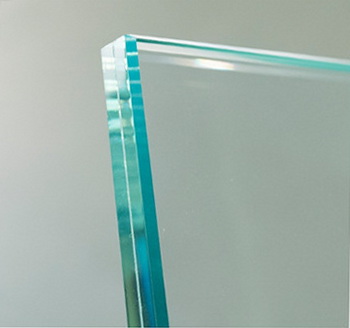 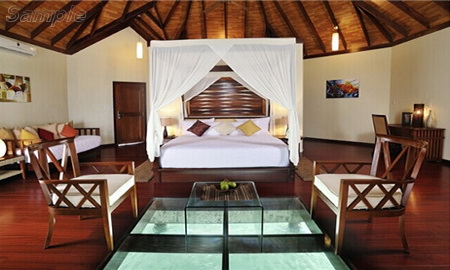 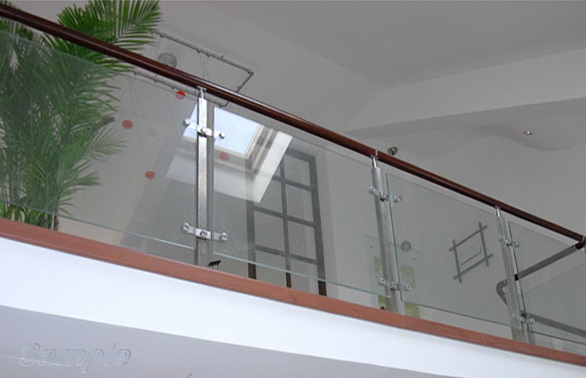 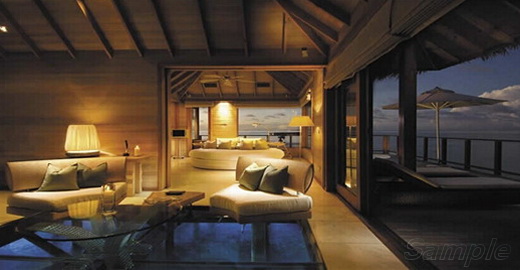 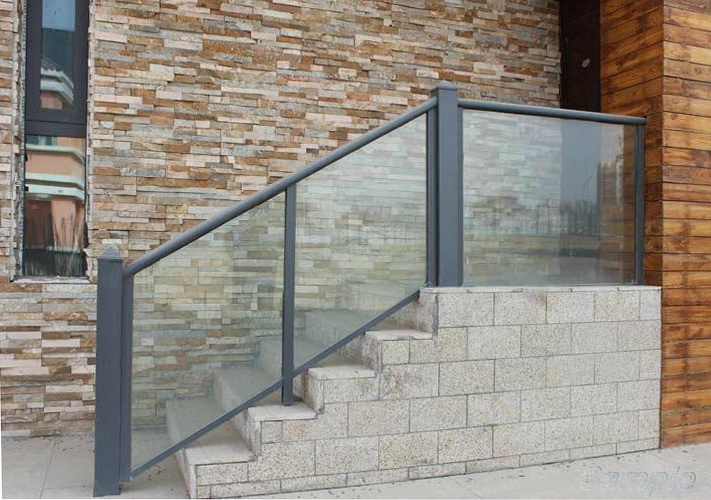 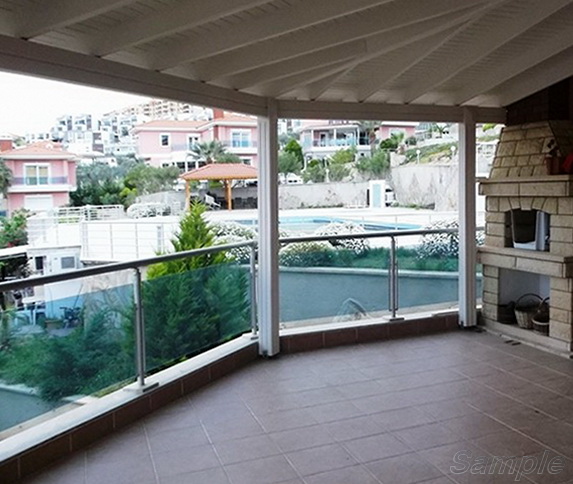 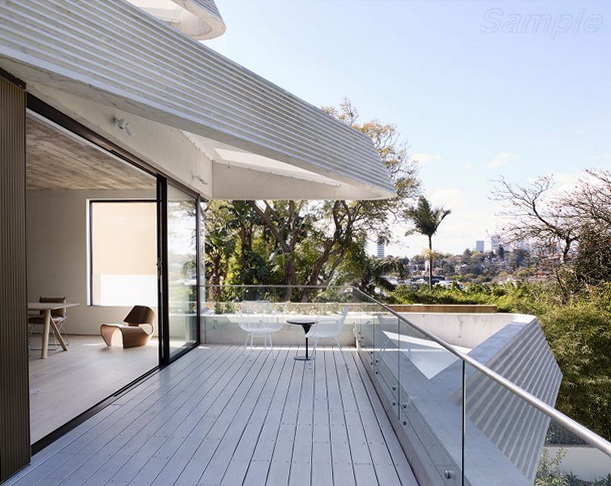 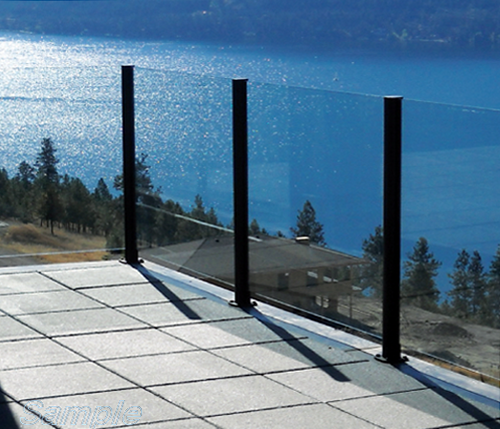 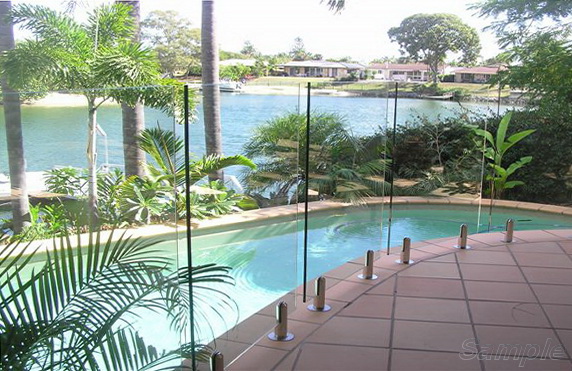 Laminated glass – a brilliant combination of functionality and safety

Laminated multilayer safety triplex glass (VSG – Verbundsicherheitsglas /De/, Laminated safety glass /En/) refers to sheet glass products consisting of several layers of glass and a binder polymer material, combined with each other along the entire plane. Such glass is classified as safe, since it is able to remain in the opening even after destruction and retains the resulting fragments on the film. “Triplex” can consist of the same or different in thickness, type and purpose of glasses and polymer layers. The final thickness of the resulting product depends on the number of glasses and polymer layers in its composition and their thicknesses. “Triplex” is produced both in the form of flat and bent glass products.

The history of triplex’s creation

In 1903, French chemist Edouard Benedictus dropped a glass flask to the floor during one of his experiments. The vessel cracked but did not fall apart, retaining its original shape. This fact surprised the scientist, who decided to analyze this puzzling phenomenon. As it turned out, the flask used to contain an ethereal-alcohol solution of cellulose nitrate. After evaporating, the mixture left a thin invisible layer of cellulose nitrate on the walls which, after falling, held the fragments of the glass flask.

It should be mentioned that ordinary glass was used in cars of that period. In the event of an accident, the glass broke into many sharp, dangerous fragments and could injure drivers and passengers. Having witnessed one of these accidents, Eduard Benedictus remembered a flask that had fallen but retained its shape in his laboratory. After a series of experiments, he made the first “laminated glass” consisting of two glasses interconnected by a layer of cellulose nitrate. In 1909 Benedictus received a patent (French patent 405, 881) for safety glass, which he called Triplex, and founded the Société du Verre Triplex company. 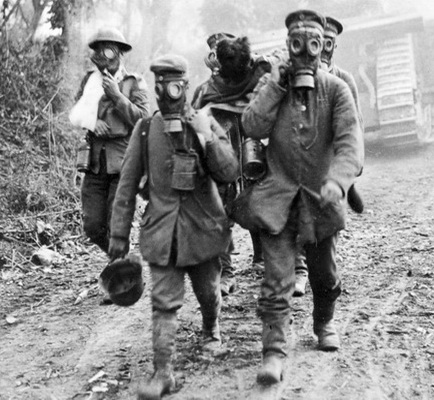 Due to the high cost of laminated glass, automakers of those times were in no hurry to use it for glazing cars. At the same time, “triplex” aroused interest among manufacturers of military equipment and acquired an application during the First World War for glass in military vehicles, aircraft, and eyepieces of gas masks.

It is worth noting that there were also alternative developments to the Benedictus method. For example, in 1905 the Englishman John Wood developed and patented a similar type of safety glass. He suggested using natural rubber as a connecting layer, which was quite expensive, and the transparency of the glass left much to be desired. For these reasons, its development did not go into mass production. Since 1919, Ford factories began to use laminated glass for the windshields of their cars, and already in 1929 this standard was introduced for all Ford models. In the future, most other car manufacturers followed suit.

For the manufacture of laminated glass, 3 main technologies are currently used that affect the final properties of products:

The process of making liquid laminated glass begins with a preparatory stage: the glass is cut, the edges are ground and cleaned.

Around the perimeter of the glass sheet, a butyl tape reinforced with fiberglass or PVC thread is fixed, in which a small gap is left for subsequent filling with resin and air removal. The prepared glass with butyl tape is covered with a second glass of the same size. Then the glass plates are squeezed so that the butyl tape spreads to a predetermined thickness. Then, the assembled workpiece is set in an inclined position at an angle of about 70-80 degrees. 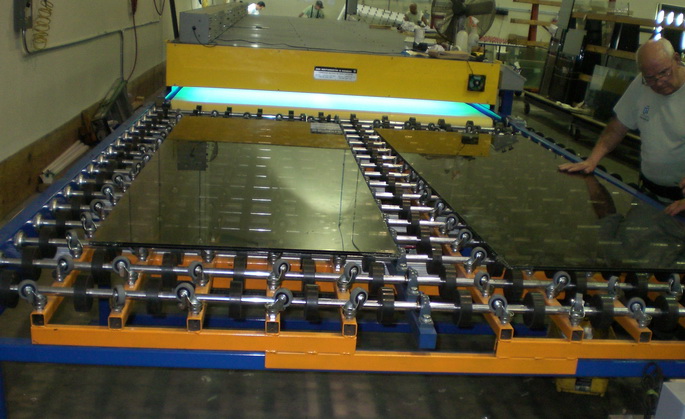 Liquid resin, dosed in accordance with the volume of the intermediate space, is poured inside the glass unit. When calculating the amount required for filling, take into account the amount of resin shrinkage specified by its manufacturer. When a precisely calculated amount of resin is poured into the intermediate space, the glass unit is returned to a horizontal position. The laminating liquid is evenly distributed by squeezing the swollen central part of the workpiece. After removing the remaining air and excess resin from the glass unit, the hole is closed with butyl tape. Curing takes place in a horizontal position.

Resins, in terms of polymerization, can be divided into two groups. One group is formed by resins, in which the catalysts, mixed with the base material, provide the polymerization process. The polymerization of such a resin is an exothermic chemical reaction that produces heat. The curing time depends on the temperature – the higher the temperature, the shorter the curing time. For example, the hardening of a 1 mm thick layer of resin at 20 ° C takes about 2.5 hours, and at 30 ° C it takes about 1.5 hours.

Another group includes one-component UV-curing resins. During the reaction, in which curing occurs, no heat is generated, and polymerization under a UV lamp leads to curing within 10-25 minutes.

Liquid lamination is the only technology that does not involve the use of elevated temperatures. Colored glasses can be made by adding pigments to the lamination liquid.

Autoclave film glass lamination is the traditional and most widespread technology of laminated glass production today. Like other film lamination technologies, it is based on the principle of airtight adjoining between film and glass. PVB film (PolyVinyl Butyral / PolyVinyl Butyral) – the main type of laminating film used for autoclave lamination. 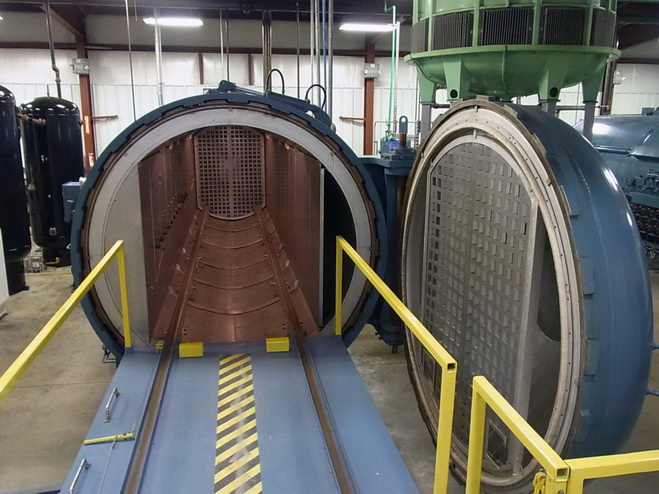 The autoclave lamination method allows the assembly of laminated glass in its final dimensions and shape (for example, automobile windshields), as well as the production of large sheets, including standard factory PLF or so-called. “Jumbo” dimensions 6000×3210 mm, from which the products of the required dimensions are subsequently cut.

The production of laminated glass by the autoclave method is carried out in several stages and can be largely automated. Before placing the PVB polymer film between the glass blanks, the glass must be thoroughly washed and degreased. If the product contains more than two layers of glass or at least one of the glasses is tempered, they are given the final size and shape before lamination, all the necessary cutouts and holes are made. After the assembly process, the pre-lamination stage follows – a two-stage compression of glass elements. The first stage is the so-called “cold straightening” – pressing in a roller machine, after which the package (triplex) is heated to 80-90 ° C – the “hot straightening” stage. Then the product is transferred to an autoclave, where by means of a combination of heat exposure – a temperature of 150 ° C and a pressure of 12.5 Bar in automatic mode, and the final pressing of the laminated glass takes place. 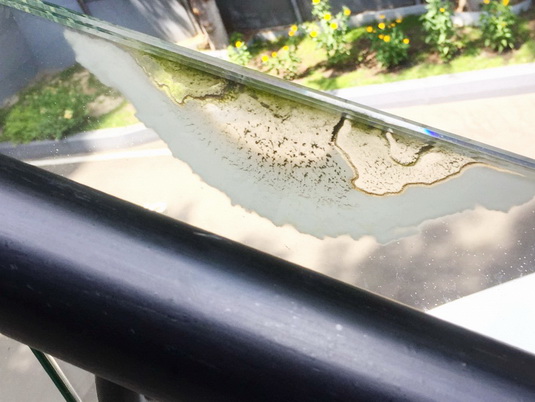 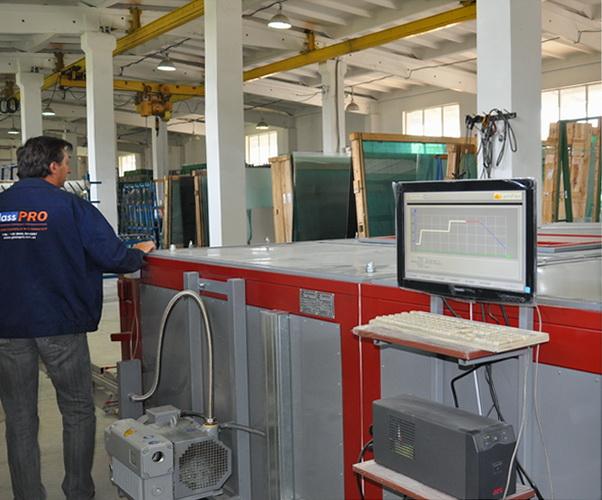 GlassPro uses one of the most modern technologies – autoclave-free vacuum lamination based on EVA (EthilenVinilAcetat) film, which allows us to produce the highest quality and most durable laminated laminated glass – triplex.

This technology is gaining rapid popularity all over the world and, like other film lamination technologies, is based on hermetically sealed film and glass.

The main difference from autoclave lamination is the use of a more modern polymer composition of EVA film, due to which there is no need to use an autoclave in the production cycle to obtain a high-quality finished product. The production technology of autoclave-free vacuum film laminated glass, as in the case of autoclave glass, is divided into several stages: preparation of the package and its sintering.

Vacuum lamination – is executed in several stages, referred to in the trade as “shelves”. Each “shelf” or lamination stage is characterized by three parameters: duration, temperature and vacuum level. The parameters of the “shelves” vary depending on the quantity, thickness and types of glass included in the triplex, the parameters of the EVA film and a number of other factors. A high quality product is determined by the use of correct parameters and their clear tracking during the lamination process. GlassPro has modern production equipment, in which the entire production process of laminated glass is managed with computer control.

Advantages of the vacuum lamination technology on EVA films:

Area of applications for laminated glass

Glazing of means of transportation

Special-purpose glass is usually laminated glass of complex composition. This is due to the high requirements for glazing elements in banks, jewelry and weapons stores, valuables stores, security posts, glass of armored vehicle.